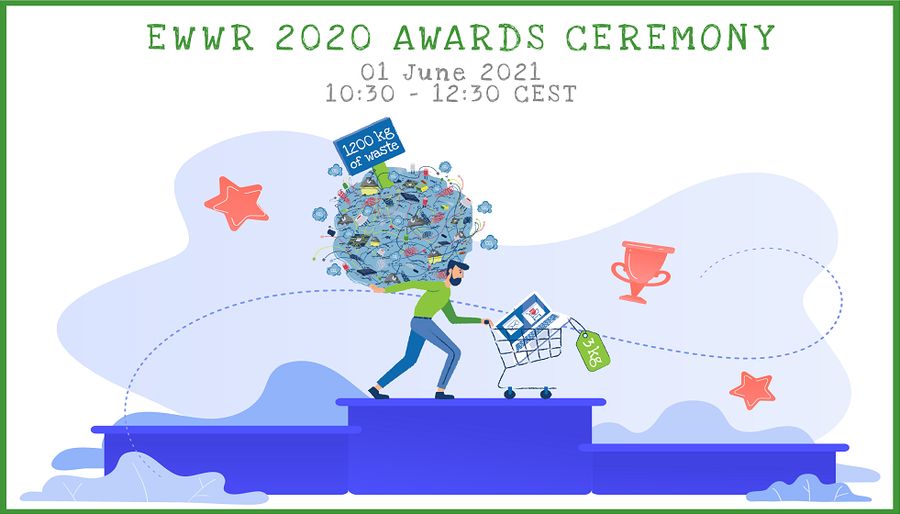 The environmental experts in the European Week for Waste Reduction (EWWR) Awards jury convened online on 31 March to select the finalists of the 2020 edition of the campaign. The jury shortlisted 16 creative and impactful actions out of a total of 84 nominations. The winners will be announced at the Awards Ceremony on 1 June.

Sixteen actions promoting waste reduction within the framework of the 2020 edition of the European Week for Waste Reduction (EWWR) were shortlisted for awards following the online meeting of the EWWR Awards jury on 31 March. The 16 finalists include three actions corresponding to each of the following award categories: public administration and organisation; business/industry; association/NGO; citizen(s); and educational establishment. The jury also selected one winner of the European Special Prize, which will award the action that best exemplified the European spirit of cooperation towards waste prevention.

This edition of the EWWR came in an unprecedented time of crisis and uncertainty. Nevertheless, once again, the campaign has received impressive traction and mobilised thousands of people who found creative ways of raising awareness far from crowds.

The jury’s selection was based on the following criteria: 1. communication and visibility; 2. quality of the content; 3. originality; and 4. long-lasting impact and follow-up of the action.For the second year, the winners will be announced online due to the ongoing Covid-19 pandemic. Keeping our positive attitude, we encourage you to look at this as an opportunity to join this joyful day from wherever you are. Furthermore, this year, the Awards Ceremony will be a pre-conference event of the European Green Week 2021 that has chosen as focus "Zero pollution", one of the key aspects of the European Green Deal. The EWWR Awards will contribute celebrating best practices and highlighting the link between waste and pollution.

The Awards Ceremony will be an online and free event.

The sole winner will be announced together with the winners in the five categories above.