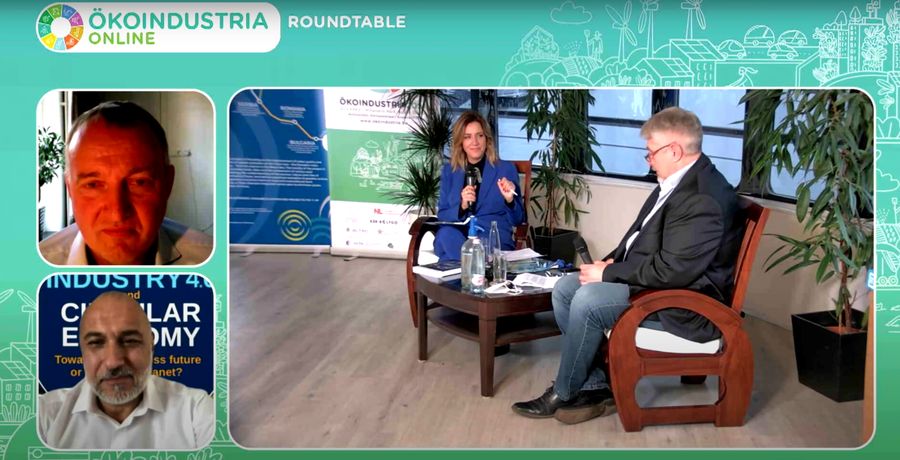 The ÖKOINDUSTRIA ONLINE INTRO event from November 4-6 took place as a preliminary program of the Budapest ÖKOINDUSTRIA Green Expo to be organised at April 28-30, 2021.

The venue of the first two days of the event was a Danube boat in style, adapted to the theme. The speeches on site and in the online space were determined by the adaptation to the current situation and the preparation for the future challenges. According to the statistics of the three-day event about 2,500 visitors from 45 countries attended the online event.

Gergely Hankó, managing director of KSZGYSZ and the main organizer of ÖKOINDUSTRIA, welcomed János Áder, President of Hungary as main patron of the expo, patrons Péter Szijjártó, minister of Foreign Affairs and István Nagy, minister of Agriculture, all the sponsors of the program, the strategic partner, HEPA Export Promotion Agency and the large number of domestic and international audience. In his introduction he highlighted, that the green economy requires a whole new approach and way of thinking, new solutions, ecologically sustainable businesses, a supportive legislation background and a fully functioning, truly circular economy. We have huge opportunities to achieve this here in Central and Eastern Europe, especially now in the pandemic period the key role is to settle the knowledge and technology transfer, to present Hungarian eco-innovations to the international markets and to promote foreign market access, which is also one of ÖKOINDUSTRIA's main purpose. 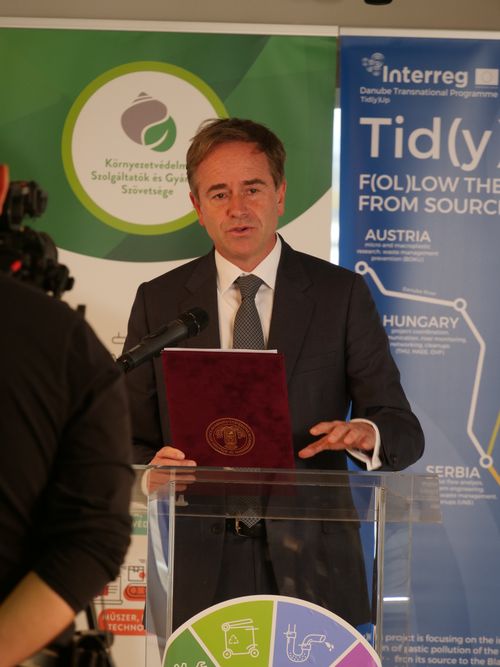 Several Dutch innovators presented themselves at the online event, including Bernard Merkx, CEO of Green Wave Plastic and co-founder of the Waste Free Oceans Foundation and Ramon Knoester, founder of CLEAR RIVERS. Johan Oost, Managing Director of the Wetskills Foundation, also presented the Dutch-based Wetskills Challenge,  and also announced that the final of the Hungarian competition will be on stage at ÖKOINDUSTRIA next spring.

He pointed out that there are currently three times as much waste generated in the world as there is infrastructure available to recover and this will only get worse. Waste production will peak by around 2030 (based on current trends), after which it is expected to decline if we successfully apply prevention practices and economic incentives. So sustainability is still a bit awaiting, but day by day it gives more and more urgent tasks. The pandemic situation has also drawn attention to our shortcomings in waste management, and to the fact that we only really value something when we feel it is lacking: so it is with health and modern waste management.

The industrial revolutions to date have brought drastic social and political changes, all of which have strengthened urbanization processes. Another revolution makes a lot of tools available to us (artificial intelligence, drones, censors, self-driving cars, smart homes, augmented reality, blockchain, internet of things, etc.) and it is up to us to make our planet better or even more unsustainable.

Mr. Mavropoulos spoke also about the future waste streams, which are as follows: 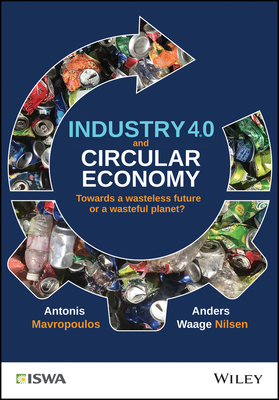 The big question for the future is whether or not we will be able to respond NOW, and prevent the catastrophe already visible on the horizon with Industry 4.0. Over the next 15 years, a “double transformation” must take place, consisting of a reassessment and reinterpretation of the concept of waste (raw material) on the one hand, and the entire waste management industry on the other.

The opening speech was followed by a “Council of Wise Men” roundtable discussion on plastics,  circular economy and the European Green Deal with Antonis Mavropoulos, Bernard Merkx, Iván Ivanovics and the moderator Krisztina Wégner.

Participants agreed that waste management can be a catalyst for the supply chain to move everywhere, but in fact at the beginning of the process, in design and production, this should be the main focus, because waste management is already an end-of-pipe solution and no longer comprehensive results can be achieved. The main topic of the discussion was the European Green Deal and its expected impact and effectiveness. According to Antonis Mavropoulos, in terms of tasks and targets, the new regulation was again aimed primarily at waste management actors, although the real solution is to be found at the beginning of the „food chain". Furthermore he explained that the agreement is lacking an inventory of its social impact and the steps needed to improve employment. Bernard Merkx said that the biggest challenge for the agreement is whether member states will transpose it into their own systems, apply it, and if so, with what effectiveness and incentives? The resources for infrastructure development and modernization necessary for the implementation of the agreement are not visible yet. Europe's legal framework for waste management was already exemplary and well-founded in the early 2000’s, only it was not sufficiently applied by the member states.

According to Iván Ivanovics, the managing director of Mikrolin Hungary Ltd., head of the KSZGYSZ Plastic Working Group, the recyclers can only act as followers, we have to go back to the generation of the waste. Design, ecodesign, expediency and marketing are not flexible enough in terms of what is good and useful, not everything should be keep under one hat. It is not the plastics that are wrong, but their complexity - for which the industry is not prepared, nor in the field of utilization. It is necessary to develop and introduce utilization technologies adapted to the design and production, so the ideas must be treated and examined carefully throughout the product chain.

Over the next six months, roundtable participants at the spring exhibition are wondering if and how the waste management system will be transforming, whether it will be able to ensure the highest possible rate of recycling, and whether decisions will be made that will promote the circular economy and social inclusion. Welfare is guaranteed at the same time. They emphasized moreover the importance of green procurement as a good example for all sectors, including policy makers and businesses. In their view, a new strategy for packaging would be needed, focusing on ecodesign and eco-innovation. 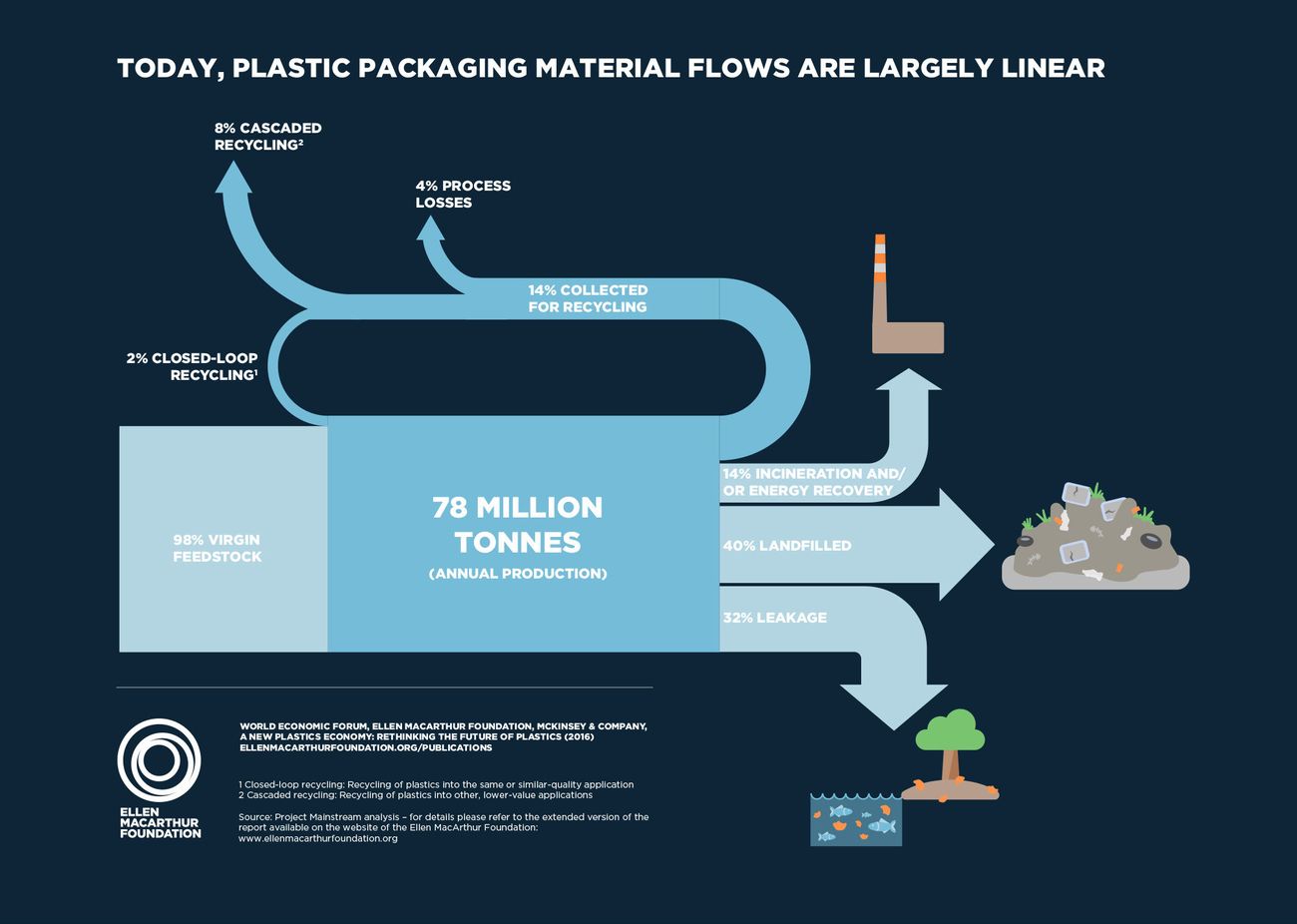 DAY2 Save our rivers-Tidy Up!

On the second day of the program, within the framework of the Danube Transnational Program - the Tid (y) Up! INTERREG DTP project “Save our rivers” conference on the protection of our freshwaters brought together in one space key Hungarian and European experts on the methods of measuring river pollution, the creating of a common knowledge sharing platform and the river waste recycling opportunities. 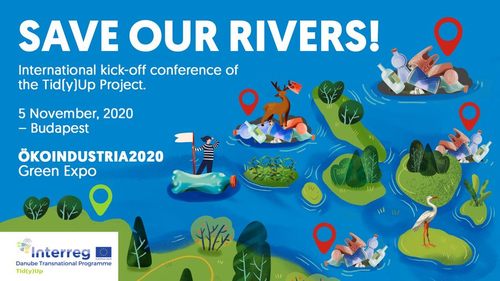 Instead of the usual kick-off event, a real water rescue summit was held on the Europe Boat and in the online space, which was highlighted by the Hungarian caretakers of the Danube Region Strategy and the Danube Transnational Program. They indicated that expectations for the project were high, hoping to be a worthy follower of JOINTISZA, enriching the toolbox created, the packages of proposals, and the number of people reached by raising awareness. 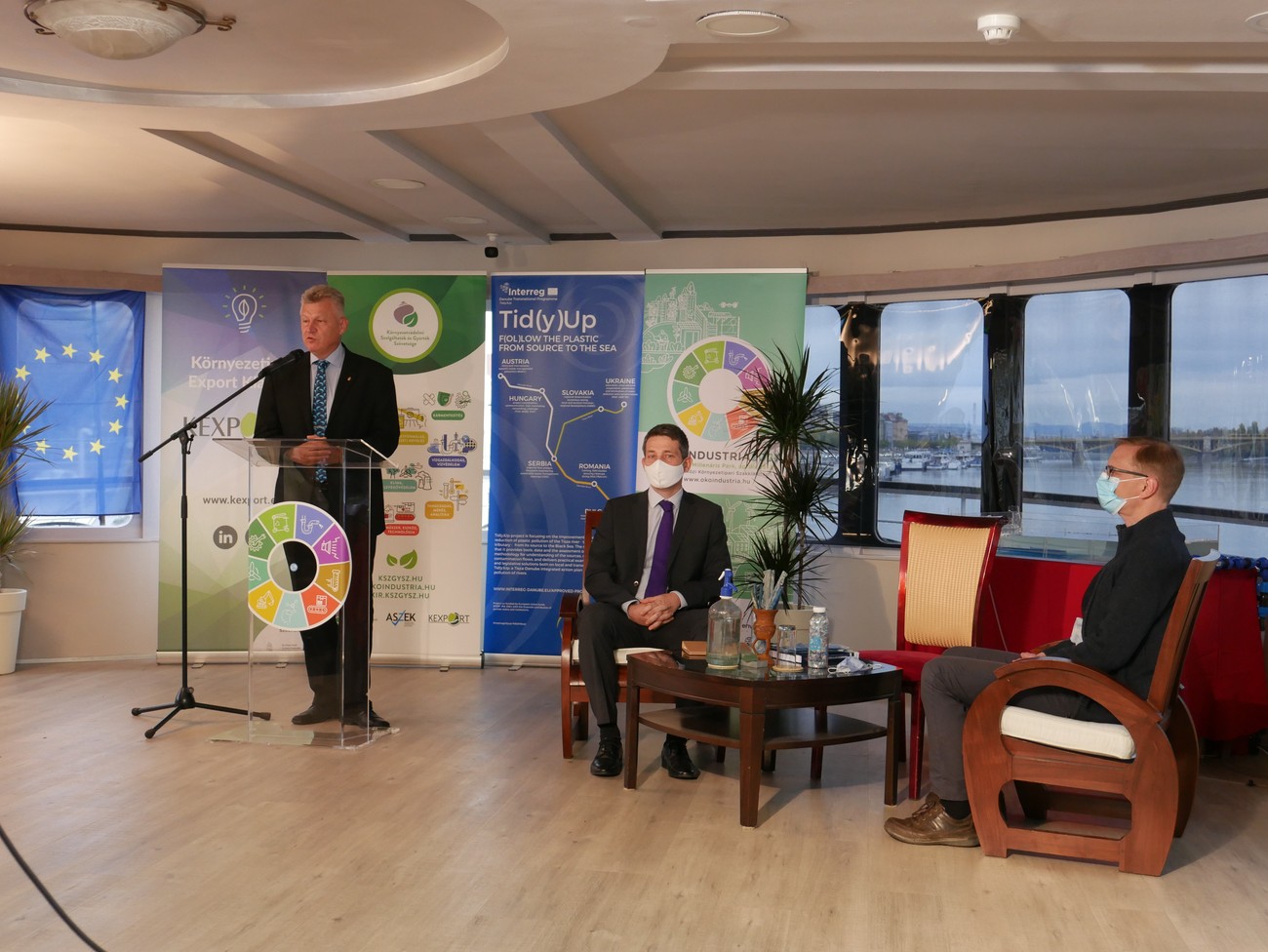 Attila Dávid Molnár, President of the Filmjungle.eu Association, presented Tid (y) Up! project objectives and 10 project partners from 7 countries, including universities, research institutes, governmental and non-governmental organizations. The Plastic Cup’s 7 years of experience and tangible results (120 tonnes of excavated waste, up- and recycled products and the registration of thousands of pollution points) can do a lot to help organizations fighting river pollution anywhere in the world.

Dr. Costas Velis, a lecturer at the University of Leeds and head of the ISWA Marine Litter Task Force, delivere his presentation on the efforts made so far and the results of research focusing on the amount of waste reaching the oceans.

A Tid (y) Up! The results of the microplastics workshop held the previous day within the framework of the INTERREG DTP project were summarized by Maja Petrovic, Assistant Professor at the University of Novi Sad. At the workshop, the 7 participating countries reported on the results of the microplastic measurements so far, and the project aims to bring these measurements to a common standard so that the data can be compared.

Miklós Gyalai-Korpos, representing Future Plastik Kft., Presented their ongoing innovation project, which aims to develop a complex system for the detection and harvest of river waste. As part of the project, a hydrological model, a river surveillance camera system, and a live, real-time demonstration of the model ship in operation in a river-simulated pool were presented. 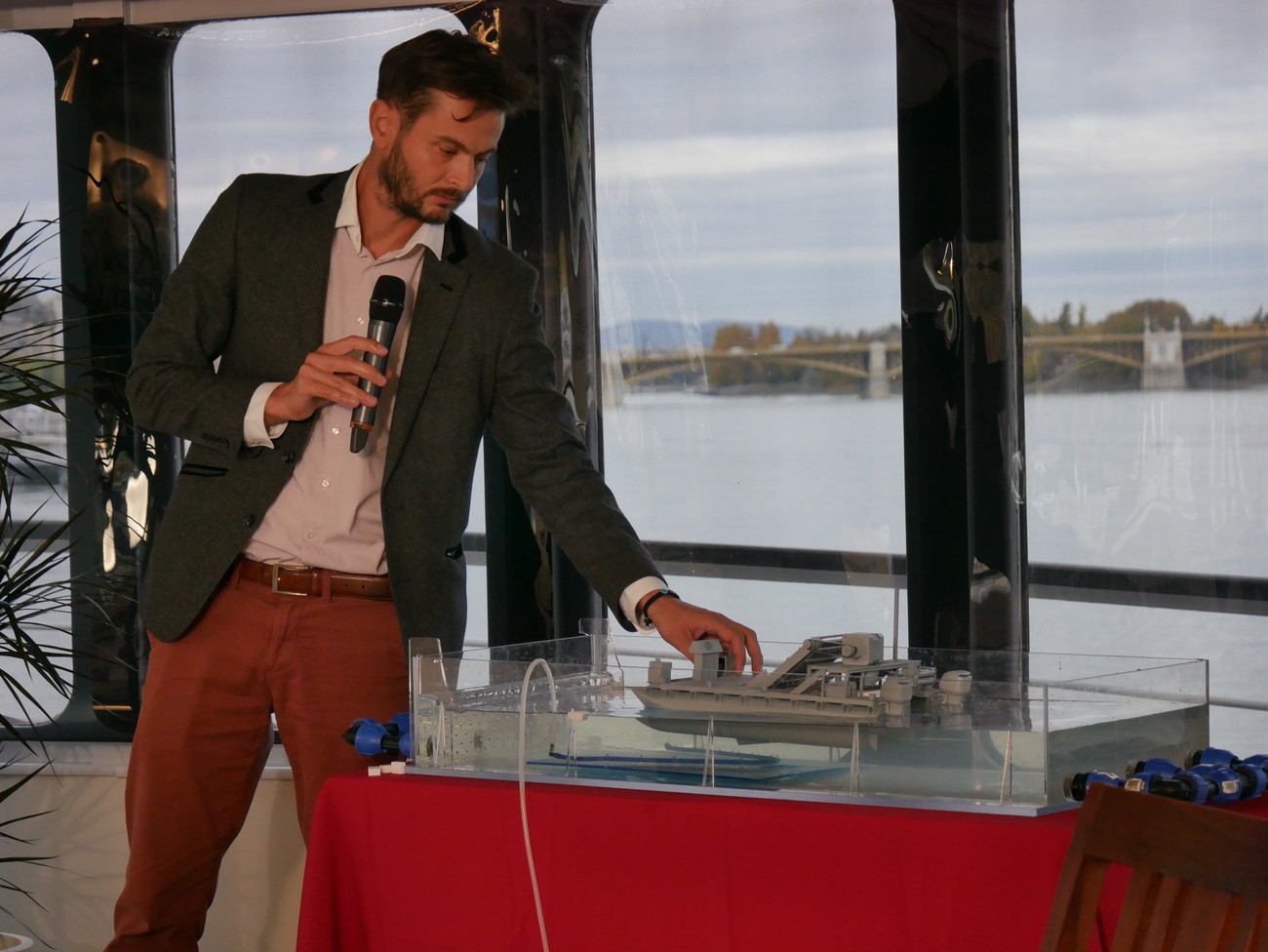 Several successful innovative solutions were presented during the day, the results of which represent an encouraging future for the Hungarian R&D project as well, and in the future the acquired knowledge and experience can become a successful export product by further developing the prototype of the river cleaning vessel.

And Day2 was not over, because the final of the Startup Plastic Surgery was held on Thursday night as part of the ÖKOINDUSTRIA Online Intro!

Startup Plastic Surgery is the first startup program in Hungary that deals with the issue of plastics. 9 teams, 9 business coaches and 15 professional sponsors and 3 financial sponsors participated in the program. The aim of the program was to support the implementation of stratup ideas that address the environmental and health challenges posed by plastics. During the 4-month program, the participating teams received business coaching and industry-specific professional mentoring support, enabling them to shape their startup phase ideas into marketable and economically viable ones. Those innovation solutions have received support, that appear throughout the lifecycle of plastics. 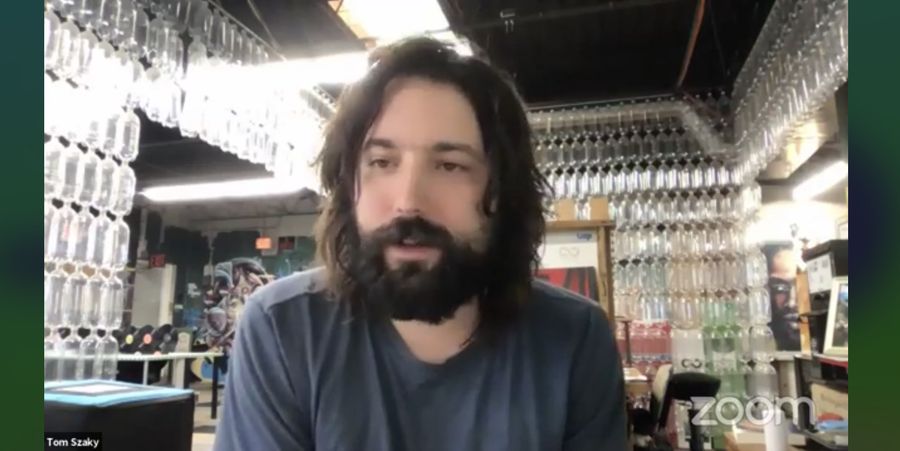 The 3-day ÖKOINDUSTRIA online event finished with a webinar on a very important topic: the possibilities of resolving the environmental burdens of company liquidation. The legislation and regulatory system is under process now in order to facilitate brownfield investments in the next years, which could serve as a best practice to follow.

You have declined cookies. This decision can be reversed.

You have allowed cookies to be placed on your computer. This decision can be reversed.